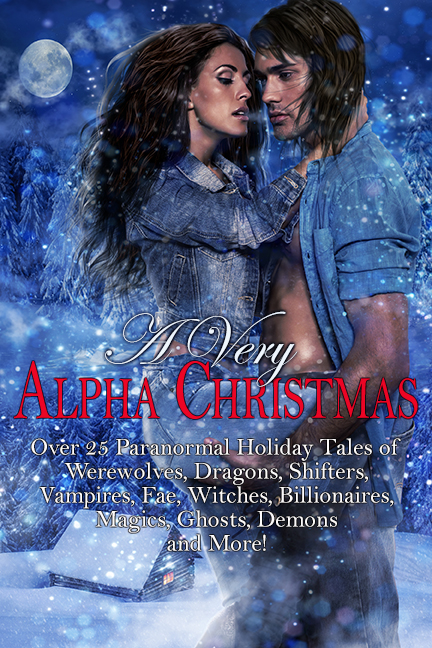 She's fire. He’s fangs. It's a match made in…Ohio?

Magick, Mischief and Kilts. Some Warlocks excel at brewing up trouble.

All she wants for Christmas is a sexy bear shifter.

A yacht trip with a billionaire vampire holds even more dangers and secrets than Cora can imagine.

If New York City falls, the rest of the world will follow. Holidays be damned.

Sometimes the best gifts are the ones that you can’t wrap.

Cristina Rayne - An Impossible Gift (Tales from the Vampire Underground)

Ellie has never met the handsome owner of her hotel, but he insist that she seems so familiar?

Devon and the playboy vamp will do whatever it takes to stop an evil witch from devouring more souls.

JC Andrijeski - A Glint of Light

Can the leader of the seer military save the imprisoned woman he loves from her own darkness?

A dragon's fire can melt the coldest heart.

A lone wolf finds his beast roused by a wildcat.

She only has a ghost of a chance to prove she didn't kill her ex-boyfriend.

When a dragon shifter rescues an ice princess, their passion is hot enough to melt glaciers!

When a lioness shifter comes calling in the dead of winter...you'd better have ice cream.

Elsa Jade - Wish Upon a Werewolf (Wolves of Angels Rest)

Annie is asking for one Christmas gift: a werewolf’s bite. But Blaze wants to give her so much more…

He needs to change his ways to win her heart…

Only one woman could melt the heart of Jack Frost…but will she burn him in the process?

Mandy Rosko - The Lady And The Dragon's Holiday

This dragon prince will melt your heart!

Candice Gilmer - Not a Gentleman’s Christmas

Saving her from her curse is a gentleman's job. He, however, is no gentleman.

Born to be a queen, raised to be a peasant.

When Bel’s father ruins a million dollar rose, she makes a bargain with a werewolf who wants her for his own.

Baked goods and banished reindeers. The perfect touch of magic for the season.

We use cookies on our website to give you the most relevant experience by remembering your preferences and repeat visits. By clicking “Accept”, you consent to the use of ALL the cookies.
Do not sell my personal information.
Cookie SettingsAccept
Manage consent

This website uses cookies to improve your experience while you navigate through the website. Out of these, the cookies that are categorized as necessary are stored on your browser as they are essential for the working of basic functionalities of the website. We also use third-party cookies that help us analyze and understand how you use this website. These cookies will be stored in your browser only with your consent. You also have the option to opt-out of these cookies. But opting out of some of these cookies may affect your browsing experience.
Necessary Always Enabled
Necessary cookies are absolutely essential for the website to function properly. These cookies ensure basic functionalities and security features of the website, anonymously.
Functional
Functional cookies help to perform certain functionalities like sharing the content of the website on social media platforms, collect feedbacks, and other third-party features.
Performance
Performance cookies are used to understand and analyze the key performance indexes of the website which helps in delivering a better user experience for the visitors.
Analytics
Analytical cookies are used to understand how visitors interact with the website. These cookies help provide information on metrics the number of visitors, bounce rate, traffic source, etc.
Advertisement
Advertisement cookies are used to provide visitors with relevant ads and marketing campaigns. These cookies track visitors across websites and collect information to provide customized ads.
Others
Other uncategorized cookies are those that are being analyzed and have not been classified into a category as yet.
SAVE & ACCEPT