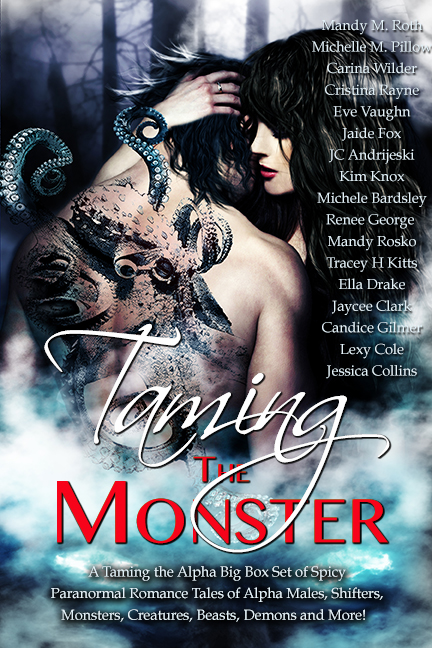 Over 15 ALL NEW NEVER BEFORE RELEASED Paranormal Romance Tales by NY Times & USA TODAY Bestselling authors as well as some of today's top paranormal voices combined into one low priced box set for your reading pleasure!

Stories filled with seductive alpha males, shifters, monsters, creatures, demons and more! You do not want to miss this limited time collection.

This bad boy biker beast has met a beauty that isn't scared off by what she sees.

Michelle M. Pillow - Stranded with the Cajun (Captured by a Dragon-Shifter)

The bayou is about to get a whole lot hotter.

Every woman dreams of meeting a desirable man on holiday...but he's not usually a mythological creature.

Reality is more wondrous and scary than she could have ever dreamed.

A down on her luck thief steals more than she bargained for...his heart.

Although he is the hottest alien overlord she's ever seen, he may not be exactly what he appears.

In trying to escape her marriage to a half-demon, her usual bad luck traps her with him.

Drawn into battle against a killer cult, she soon realizes that more than her life is at stake...so is her heart

When destiny knocks at your door after midnight, you let him in.

This werewolf will make you howl!

Being sacrificed to a lake monster was not how Ivy wanted to spend her birthday.

Scaring the ship engineer wasn't exactly how this shy monster wanted to get her attention.

When the Sandman finds her, Chevy turns to the dangerous dragon shifter lover she left behind.

When the monster is your ex-girlfriend, sometimes the rules have to be broken.

Rules are made to be broken.

I was best friends with a monster...and never even knew it.

We use cookies on our website to give you the most relevant experience by remembering your preferences and repeat visits. By clicking “Accept”, you consent to the use of ALL the cookies.
Do not sell my personal information.
Cookie SettingsAccept
Manage consent

This website uses cookies to improve your experience while you navigate through the website. Out of these, the cookies that are categorized as necessary are stored on your browser as they are essential for the working of basic functionalities of the website. We also use third-party cookies that help us analyze and understand how you use this website. These cookies will be stored in your browser only with your consent. You also have the option to opt-out of these cookies. But opting out of some of these cookies may affect your browsing experience.
Necessary Always Enabled
Necessary cookies are absolutely essential for the website to function properly. These cookies ensure basic functionalities and security features of the website, anonymously.
Functional
Functional cookies help to perform certain functionalities like sharing the content of the website on social media platforms, collect feedbacks, and other third-party features.
Performance
Performance cookies are used to understand and analyze the key performance indexes of the website which helps in delivering a better user experience for the visitors.
Analytics
Analytical cookies are used to understand how visitors interact with the website. These cookies help provide information on metrics the number of visitors, bounce rate, traffic source, etc.
Advertisement
Advertisement cookies are used to provide visitors with relevant ads and marketing campaigns. These cookies track visitors across websites and collect information to provide customized ads.
Others
Other uncategorized cookies are those that are being analyzed and have not been classified into a category as yet.
SAVE & ACCEPT